Mama I’m in the Guardian! & I’m going to be publsihed!! 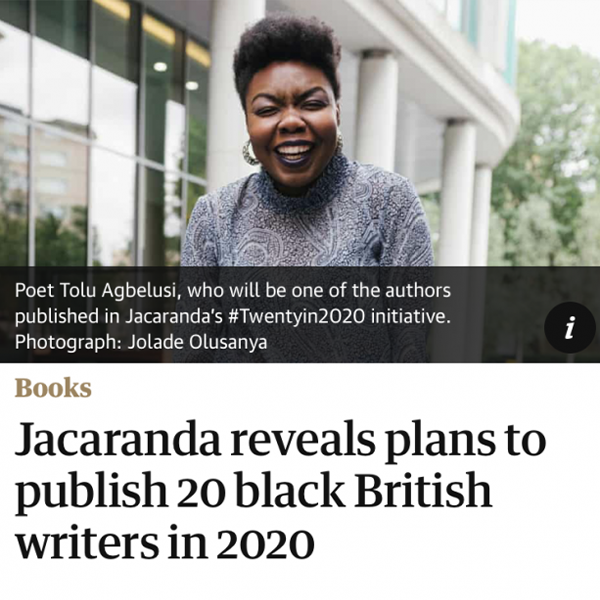 For close to a decade now, people have been asking me if and when I’m going to publish a collection of poetry and my answers always have some tinge of; when the time is right, when I find the right people, when the work is ready… I got impatient with the process often and then recentred myself, often with the help of brilliant writer circles. Callaloo Creative Writing Workshops under the tutelage of Vievee Francis gave me a confidence in my work that I had never had before. Suddenly, I understood craft ion a different level. I bought so many books and read them. I started running Home Sessions, my own writer development program for young BAME poets and I had the privilege of watching people grow. That’s only two poetry families, there are a multitude of poets who I call to talk life, who geek over poems and process with me. we watch ourselves grow and contribute when we can.

This was supposed to be a post about a poetry collection. I submitted my manuscript for the #TwentyIn2020 initiative and hoped this wouldn’t be another almost situation. Queen of the back up plan, I also submitted it to other places, but I wanted Jacaranda. I had met Valerie Brandes before. She is the kind of woman I admire. Selfless. Lifts people and passes on contacts and knowledge freely in this world where people hold on too tightly to everything. A believer in there is enough for all of us. I’d also met Joy Francis who develops writers and has a million and one other hustles like me. I knew if I was a part of this project it would launch me in a way that would make the wait worth it. It was out of my hands though so I waited.

When I got the email to say I made the cut. I was at work, I was having a tough day and it was the news I needed. The Guardian emailed about a picture as did the publishers. I assumed they were going to use all our pictures, so when the Guardian article came out in the morning and my face alone was on it. I literally pulled my sit back and beamed for a little moment. Again everything was going wrong at work as it sometimes does with clients who know better (I’m a lawyer). I decided to break the bad vibes by sending the link to a couple of the partners at my firm and a colleague who instead of keeping it to herself like i expected her to, announced it to the whole of her floor and started crying. It’s a beautiful thing when people rejoice over you.

The next morning I was in the middle of moving out of the house that has been home for the last 20 years when I saw an email from work. I was in the Guardian again. print this time and someone had found it and circulated around the whole office. It felt a little surreal. I asked my dad to buy the paper on his travels without telling him why. The pride in his face when I found my face on page 13 and gave it to him was worth it. Mum was proud too.

All things work together for the good of those that love the Lord. To them who are called according to his purpose . Romans 8.28