What better way to celebrate Arts Council funding than with a press release? 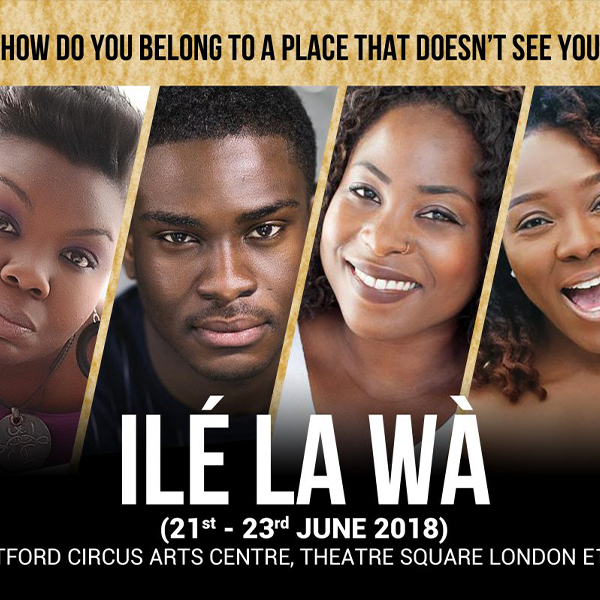 Image can be downloaded here & trailer can be viewed here

Ilé La Wà deals with issues of immigration, deportations and the Windrush Scandal

‘You have chosen Britain but has it chosen you’? The Windrush Scandal is the latest event to remind us of questions that don’t go away for some of us. How do you belong to a place that doesn’t see you?

Anni Domingo directs Tolu Agbelusi’s debut play Ilé La Wà (We Are Home), which returns from a sold-out preview at Richmix in 2016 for a 4-show run at Stratford Circus Arts Centre from 21 – 23 June 2018 during Refugee Week.

Caught in the web of the government’s hostile environment as collateral damage, or target, four character’s lives are interrupted when they can’t produce ID in a spot check. What follows in the holding room where they wait for verification of their legal status’, are a series of interrogations of the self and each other, laying bare the realities and implications of always being ‘the other’ in a place you call home.

Speaking about her play, Tolu said, “When I wrote Ilé La Wà, I was contemplating how society decides who gets to belong. It feels very much about the Windrush Scandal, but that’s a new face for the consequences of our government leading the charge to say some of us don’t belong. Government-sanctioned go home vans, institutional racism with in the police, threatened deportation of children who’ve lived here most of their lives, and the mental toll of feeling you don’t belong any place, were just a few of my preoccupations”.

Ilé La Wà, which means ‘We Are Home’ in Yoruba, (a Nigerian dialect/language) is based on real stories from interviews, workshops and media accounts. It’s a defiant affirmation that says ‘nobody gets to tell me where I belong’. This is the first time Tolu Agbelusi is working with the director, actor and writer, Anni Domingo, so we are excited for the show, especially with a whole new talented cast.

For interviews or further press information, contact Emmanuel Sugoi (Producer) at whenifindhome@gmail.com or 07532 825 243

Ilé La Wà is a product of ‘Home Is…’, a poetry and visual arts project curated by Tolu Agbelusi exploring the impact of physical and emotional displacement on people’s concepts of home. Supported by the Arts Council & Counterpoint Arts, Tolu interviewed about 30 people across London, Manchester and Liverpool about their experiences of home. Working with a group of poets, many of those narratives became poems, which were the basis for the play & collaborations with illustrators, a dancer & an animator, which culminated in a two-week exhibition at Richmix.

The following video and web links provide more information about the project:

‘Let me be clear. This is a show for everyone, no matter what you believe’ (A Younger Theatre)

Tolu Agbelusi is a Nigerian British writer, performer, educator and lawyer. Born in Nigeria, she moved to the UK at age 13 and has since lived on a few other continents, igniting her where/what is home interrogations. As a lawyer who currently works in civil liberties and a writer who teaches all ages, she is constantly engaging with how our actual or perceived identities shape our experiences. When she isn’t figuring out what it means to not be Nigerian enough anymore and to never have been sufficiently British in the first place, she is being commissioned as a poet by the BBC & the Southbank amongst others, and leading guest lectures (poetry) including to Ph.D. students at Birbeck and graduate students at Kings College. Tolu also runs Home Sessions, a seasonal poetry & development course for BAME writers. For more information, visit her website at www.toluagbelusi.com

Anni Domingo is an actress, singer, director and writer working in theatre, radio, TV and films. Recently spotted on the National Theatre stage for Palimpsest, a panel celebrating exemplary Black women in UK theatre, with the likes of Noma Dumezweni and Yvonne Brewster, Anni brings to her role as director, 40+ years of experience and a natural knack for storytelling. Anni’s company ‘Shakespeare Link’ takes Shakespeare workshops to schools and colleges and her Shakespeare workbooks are used in schools. She has just finished her first novel, Breaking the Maafa Chain.

Refugee Week is a worldwide annual celebration hosted in the week around World Refugee Day on the 20 June. In the UK, with a nationwide programme of arts, cultural and educational events, it’s the largest Festival celebrating the contribution of refugees and encouraging a better understanding between communities.